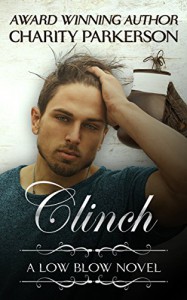 A well-paced, well-written love story reuniting two lovers, Gunnar and Liam. Liam is a strong and out young man who came out in high school and works as a stripper because he wanted to save up money fast and spend time with his nieces and one day adopt. He knows what he wants and goes after it. Gunnar is a fragile professional boxer who is still recouping from his prior relationship with another professional boxer, Boston. This reader suspects that Boston will be starring in book 2 which is not appealing after reading about his relationship with Gunnar and his behavior in Clinch. Kaz, Liam’s best friend, is Liam’s recent ex-boyfriend who wasn’t ready to commit which had always been what Liam was looking for.

Clinch starts us with Gunnar and Liam being neighbors who rarely interacted but Liam accidentally locking his keys in his car provides tinder to their reunion. We get to see how their past relationship didn’t work out. We get to find out what happened between Kaz and Liam and why Liam is single, allowing for this chance for him and Gunnar to try to make things work. We get a disconcerting, somewhat distasteful view of Boston, Gunnar’s ex, who nearly destroys the relationship between Gunnar and Liam. Finally we get to see how great Kaz can be as he realized what he lost when he and Liam broke up and how he still remains a great friend.

This story displays mostly admirable characters in a very well-written manner. It keeps the reader interested and invested in the development of the characters’ relationships. It will be interesting to see what dark situations and revelations the author will churn out to make Boston a likeable fellow.


A free copy of the book was provided to me by the ReadingAlley in exchange for an honest review.
Tweet